So I ate some mumble pie this morning!  In the gig I am doing at the moment, they have deployed Riverbed Steelhead appliances to every remove location they have, with the view that with a centralised Exchange 2010 will work, even with high latency low bandwidth links.

As expected I had my concerns!  I moved a couple of hundred mailboxes over the weekend from various Exchange 2003/2010 servers around the world, and checked the Steelheads in the main data centres this morning.

What do you think! The best result was 93% LAN vs WAN data compression which is just amazing!  This was actually for BlackBerry connecting to a remote Exchange 2003 server! 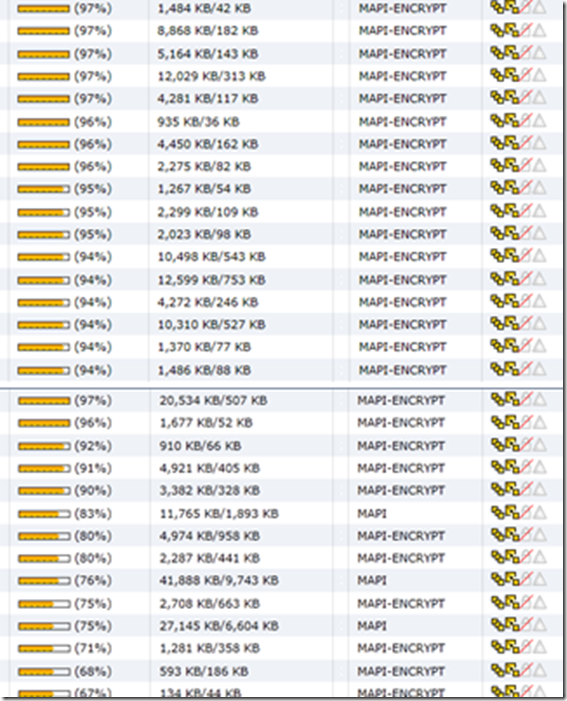 For pure Outlook the numbers are impressive.  The Steelheads actually “learn” what a user is doing so the compression will only get better.  Add to that, the fact that the steelhead will keep an open connection to the CAS Array and pre-fetch any new mail, so the when the user connects to the mailbox in the morning, new mail will be almost instantly delivered!

If you have high latency, low bandwidth links you have to have a look at these as they are amazing!  They are actually an RoDC so they can decrypt compress, transmit and re-encrypt the data!

On another point, it is possible for the steelheads to optimise DAG replication traffic! I am going to try this in the lab!

On a downside, they are unable to optimise mailbox move traffic, but I have been told that an update is coming soon that will fix that too!

I am going to put the update in the lab, so will update you on any progress.

One thought on “#Riverbed Steelhead and #MsExchange”